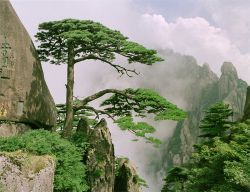 Classical Chinese Medicine is an holistic system of preventive medicine and healing that has been practiced for thousands of years.  Classical Chinese medicine includes the modalities of Acupuncture, Chinese herbal medicines and Qi Gong. These are tools used to harmonize and restore the body, mind, and spirit to a state of health. The ancient Chinese recognized a vital energy within all living things.  This energy is called Qi (pronounced chee).  One of the Chinese Classics defines Qi as the “root of a human being.”

Qi:  Mountains, plants and human emotions all have Qi.

When Qi concentrates its called matter; when it spreads its called space; when it gathers together, there is life; when it separates, there is death.  When Qi flows in a living entity there is health; when it is blocked, there is sickness.

Qi flows in a vessel-like system called meridians or channels.  You can think of these channels as rivers and the Qi as water.  Most of the channels begin or end near the tips of the fingers and toes and travel throughout the body passing through various internal structures and organs. These channels are independent of other structures such as blood vessels and nerve pathways and encompass the entire body.  Along these channels are acupuncture pointsthat are likened to wells that reach the river of Qi in the channel below. Qi flows freely in a healthy body.  Just as a river is changed by a dam, symptoms of pain, illness or disease will manifest when Qi becomes blocked or unbalanced.  Physical injury, emotions, lifestyle and the foods you eat may interfere with the proper functioning of Qi.

Acupuncture, Chinese herbal medicine, and Qi Gong work to remove blockages that interfere with healing, thus promoting balance and the restoration of health.